Documenting Dubai International Airport addresses more than a forgotten anniversary. It also gathers a history of innovation and entrepreneurship, two current hashtag words in Dubai, where “golden visas” get doled out for big-ideas people. Today there is no match to the enterprising of Keith Page in the late 1960s, when he resolved to land the design contract for the airport. It happened through a recipe of hustle, historical truth, and happenstance. The hustle: that Page was making a name for himself in the region as an architect, though self-taught without formal training beyond that as a draftsman. The historical truth: that the late 1960s were some of the most assured years for British consulting services in gaining work in Dubai. The happenstance: that Page was finishing work on an interior design project in Dubai for one of the city’s most powerful people. The auspicious client tipped him off that a new airport terminal was planned for Dubai.

Returning home to Kuwait with the secret, Page sought a partner with credentials. He found Brian Broughton, a licensed architect with a degree from Canterbury School of Architecture and also living in Kuwait.1 Knowing that their secret would soon be out, the two British men whipped up a design proposal. There was no brief for the project, so Broughton made one of those too.

Not much later, both Page and Broughton visited Dubai, likely accessing the ruler’s majlis via Mahdi Al Tajir, Page’s previous client. Broughton recalls that it was a swift approval process—a round of applause in the diwan. The two men left Dubai, officially formed a partnership, Page & Broughton, and signed a contract before the close of 1968. They might never have pitched a project together again. Page was soon spending more time in Dubai. Even though some recall Page being a fanciful draftsman, Broughton recounts that he was the one who put pen to vellum sheets, first in Kuwait and later in Nicosia, where he prepared the new partnership’s designs. While Broughton remained huddled over a drafting table, Page kept his ear to the hardening tarmac roads of Dubai, listening for new projects. He got talks going to design a hospital prototype, a bank, and offices and tank stations for Shell Oil.

Page & Broughton could have been a model for how a small firm can instrumentalize methods and expertise in one part of the world for another. The firm could have shown how it is done nimbly, in contrast to the too-big-to-fail consultancies that dominate global networks today. Expensive minutes over the telephone and posted airmail parcels comprised Page & Broughton’s sinews of communication. Unpaid bills, a collapse in trust, and maybe a touch of hubris made for the end to this short-lived firm.2

These days, when even the slightest of architectural pursuits in Dubai are flush with NDAs, RFPs, RFQs, and MOUs, it’s remarkable to consider that Page & Broughton put together a brief on their own, one that was surprisingly advanced for airport travel. More crucially, one that housed the imminent reign of Dubai as the region’s “kingpin” in aviation. European presses praised the design’s clear delineation of services, a smooth choreography of ticketing, baggage transfer, and flow of arrivals and departures. Upon the airport’s completion, the Financial Times reported that “Dubaians are hoping that tourism can be developed.”

In Beaches, Ruins, Resorts: The Politics of Tourism in the Arab World, Waleed Hazbun chronicles how the terminal by Page & Broughton pinpointed Dubai as the greater region’s hub and aspirational model. In its first years, its flight traffic increased by figures around 50%. As a continuation of the city’s entrepot status, the focus on transit passengers and an alluring “free zone shopping area” kept the airport going, even when financial fortune didn’t blow in Dubai’s direction. Mounting success at the airport unleashed more transformation in the city; as Hazbun recounts, the airport’s success can be linked to the 1975 opening of Dubai’s first international brand hotel, the InterContinental.

The airport was innovative, however, even before it existed. With the concept design in hand, Broughton met with London-based Mickleover Transport, once a manufacturer of outfits for trucks and transportable buildings—in other words, a maker of shelters on the move. Architecture was already, nearly always, a global story of multi-sourced parts and materials. The 1971 terminal building heightened that sense of confluence. With what in Britain was called glass-reinforced plastic, Mickleover converted Broughton’s concrete proposal into a transferable kit of parts.

Before becoming a building, the project was a single shipload. Like the carcass of an unborn monster, the terminal’s alabaster skeleton was transported from London to Dubai’s Port Rashid. One port received another port. On the ship were stacks of “technically flawless” components to compose 110 iterations of what a German architecture magazine called Pilzdächer, or mushroom roofs. The same magazine declared that the result was the world’s largest plastic building.

The plastic composite had its advantages: the total weight of the parts was three tons, compared to forty tons had it been made out of concrete. A lighter building was also ideal for the location; it would sink less into the dangerous salt-water table, one meter below site. Additionally, its creators promised that the material was ideal for the roof’s exposure to humidity, strong UV radiation, and unstable surface temperatures reaching as high as 83ºC.

The project was described as a large-scale puzzle, with a crane lifting and inserting each column, like a giant’s game of pachisi. A British team was joined by immigrant laborers from South Asia, their numbers reduced to a minimum in this British-economy booster program. They scurried across a concrete game board to guide the giant pins into position. With partial assembly required, workers sealed the columns together with steel and aluminum profiles, phenolic foam, and concrete. Then they channeled rainwater downpipes through the hollows.

This instance of prefabrication was no cookie-cutter infrastructure, but rather expressive architecture, most memorable for its interior “atrium gardens”; its columns that soared into the form of vaults; and its helix-like ramps to whirl passengers and luggage down to the tarmac. Covering a footprint of 233m x 116m, the terminal housed Dubai’s vastest interior. Described as a “gleaming white complex,” a showpiece, it was an architecture of welcome for some place prosperous, even if not yet existent. In its advertising, the project engineers called it “perhaps the most beautiful airport in the world.” For decades, the terminal was Dubai’s reception hall.

Page & Broughton’s design is recognized as one of the first in Dubai to represent Islamic architecture. One review described it as a “synthesis of classical Islamic architectural elements and the slickness required of a jumbo jet.” The architectural correspondent for the Times smelled “more than a whiff of Oriental influence.”

Broughton noted that the ground floor was made expansive, in the event that disaster stranded travelers there. Foreboding how the terror of hijackings was to weigh down 1970s aviation, the Financial Times reported that the airport was “designed to be coup-proof.”

It was also designed to preserve the manufacturing industry in Great Britain. As one article explained, prefab projects exploited “the possibility to complete construction in highly developed industrial countries and to export them.” The 1970s are littered with attempts to make prefab as exportable as the expertise that proposed it. A decade of optimism, however, was not met by actual results. Those British manufacturing jobs were disappearing anyway, and the construction industry in Dubai, and the rest of the Gulf region, chose another source of foreign labor, one underpaid and more easily exploited, initially from India and Pakistan.

Prefabrication is experiencing a rebirth today, with preferred terms like “off-site construction” and “productization.” Robotics is preached. Proponents predict better conditions for low-income workers, but really the talk feeds a regional fantasy that low-income labor will disappear, or at least reside in lands far away from Dubai.3 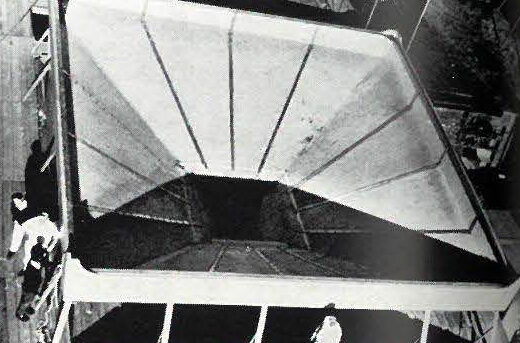 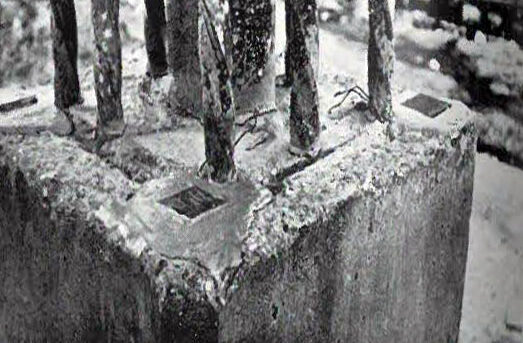 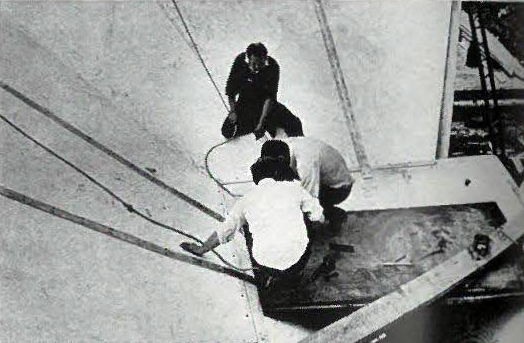 For the last sixteen years, Terminal 1, as the building is now known, has remained my gateway in and out of Dubai. Upon entering, I look up fast for a glimpse of the mushroom clouds, just as I have to duck into the low-ceilinged check-in area which was originally designed for backstage services. During my last time there, I registered an escalator I’d overlooked before. With time to spare, I took it to a waiting area, perhaps to where the open-air atrium once had been, but now enclosed by a pitch-black ceiling. A shuttered Costa Coffee, a half-empty convenient store, and a scattering of cafe chairs occupied the abandoned level. I dragged my roller bag around to get closer to the capitals of those umbrella columns, like a paleontologist who has climbed a ladder for a better look at the skeleton of an extinct beast.

The columns had once sailed through the Suez Canal, had arrived at the still fresh berths at Port Rashid. And they had ended their travels suspended in air before being locked into concrete, as if forever. Dubai’s most sublime architectural space is now forgotten real estate, obsolete. At least one can, for now, ascend to observe its intended reaches. 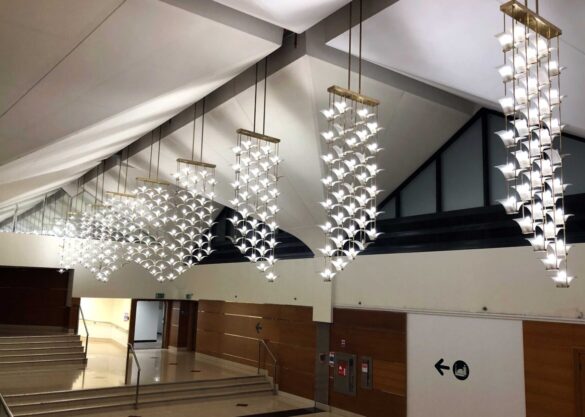 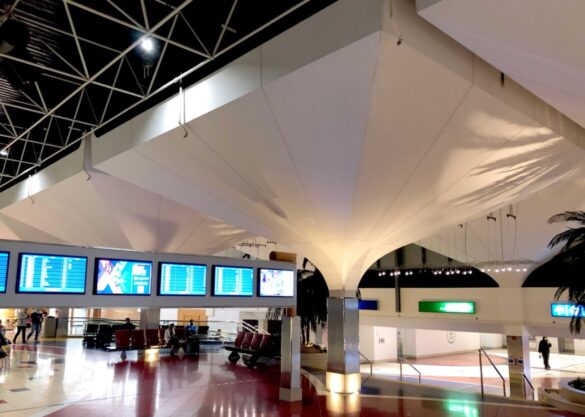 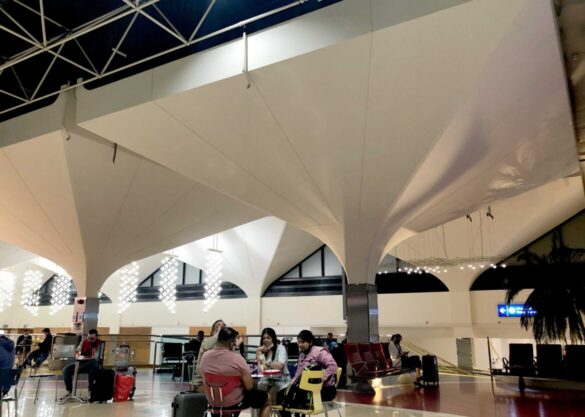 * In Kuwait Broughton worked for British engineering consultants Costain and then for what became regional heavyweight KEO. Broughton noted that Costain joined the development team after the hiring of Page & Broughton (see previous dispatch). Biographies for both Page and Broughton were collected for Building Sharjah (Birkhäuser, 2021). I interviewed Broughton several times between 2018 and 2021. Keith Page died in 2008.

** I have shared information with Broughton about two buildings based on his designs which were realized without his knowledge, one being the near replica of Shell’s offices in Deira but rebuilt in Bur Dubai. Two other projects are described in Building Sharjah.

*** Rather than living on two-year contracts in labor camps in a country without citizenship and family, the argument goes, they can work closer to home and with at least steadier working conditions.

Please sign up below to receive notice when I’ve posted more about Dubai and its 20th-century transformations. ⬇

This is the fifteenth dispatch around the publication of Showpiece City. You can read the first fourteen: Telephones & Dynamite; A Season of Migrations, West; A Circumscribed World; Gathering at a Roundabout; John Harris Comes to Dubai; and Wild Machines over Dubai; Have Some Fun; Thrown to Stand; A Shipwreck Seen; Crossing as Destination; A Stage for Palestine; Temporary by Degree; City as Exhibition; Rule of the Road; and Flight Control, Part 1.